The Relais del Corso is a historical residence which dates back to the 1800s.It is situated in the historic centre of Martina Franca within walking distance of the Basilica of San Martino and Piazza Plebiscito the heart of the Pugliese Baroque art. A scrupulous renovation has allowed the creation of prestigious suites equipped with every comfort embellished with stone and wrought iron elements typical of the historic buildings of the Baroque era.

Our services
Breakfast
Breakfast is a characteristic element of this residence concentrating on typical Apulian specialties made with local produce. During the summer breakfast can be served on the terrace or in a common indoor environment or on request directly in the room at no extra charge. Alternatively, for those who want to experience the everyday life of Martina, it is possible to have breakfast in the famous ``Caffè Tripoli`` which is situated below the residence, an icon of typical pastries for over a century. There is no surcharge.
Terrace/solarium
A valuable element of the residence, is an outdoor space available to guests during the summer to enjoy the beauties of the place. Overlooking the street, with the Piazza Plebiscito and the Basilica of San Martino in the background, the terrace is an oasis of tranquility and relaxation in the historic center. In the morning, a breakfast buffet is served and the terrace is available all day for guests who would like to relax and spend a few hours outdoors, enjoying the sun by the pool. In the evening it is an ideal place to enjoy the cool summer evenings under the stars and with a night view of the historic beauties of Martina Franca
Suites
The suites are the result of a meticulous renovation aimed at restoring the valuable elements of this historic home, its vaults and stone portals, wrought iron elements, solid wood details and everything that embellished this ancient noble house. 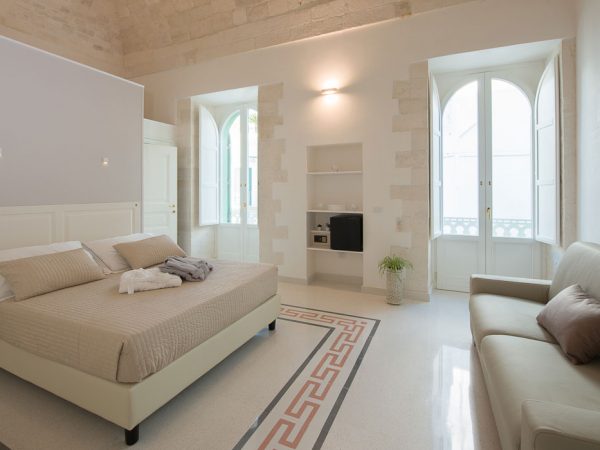 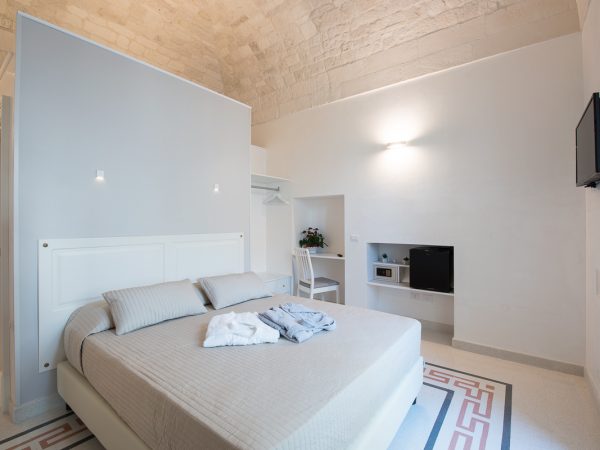 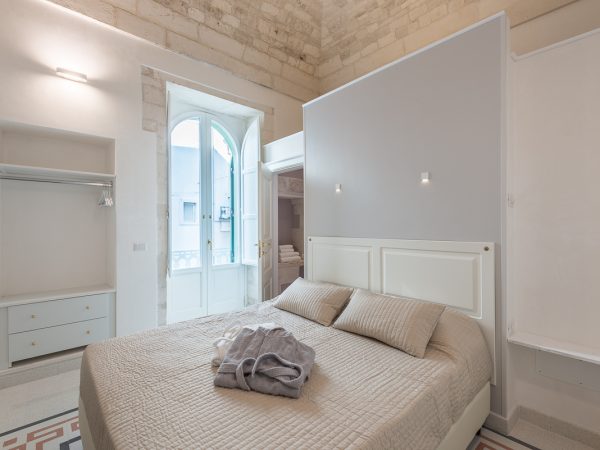 Suite Norma
Details
Itinerary
One of the most picturesque and colourful corners of Puglia
In one of the most picturesque and colourful corners of Puglia, we find the Valle d'Itria with its blaze of colours that from the green of the ancient olive trees, to the white of the typical trullo, to the red of the lush land, offers one of the most beautiful landscapes in Italy.
In the background, the towns of Martina Franca, Locorotondo ,Cisternino, Ostuni and Alberobello, with their dry stone walls, olive groves and vineyards.
A land which is a crossroads of the Mediterranean, a thousand-year-old place where encounters and clashes between people of different and distant origins took place, whose name is inspired by the Eastern cult of the Madonna Odegitria, coming from the territories of the Eastern Roman Empire.
The multiple cultural influences are manifested in the sumptuous Baroque architecture of Martina Franca, in the pointed roofs of Locorotondo which are among the most beautiful villages in Italy or in the many trulli of Alberobello, an Unesco heritage.
Gallery
Photo gallery 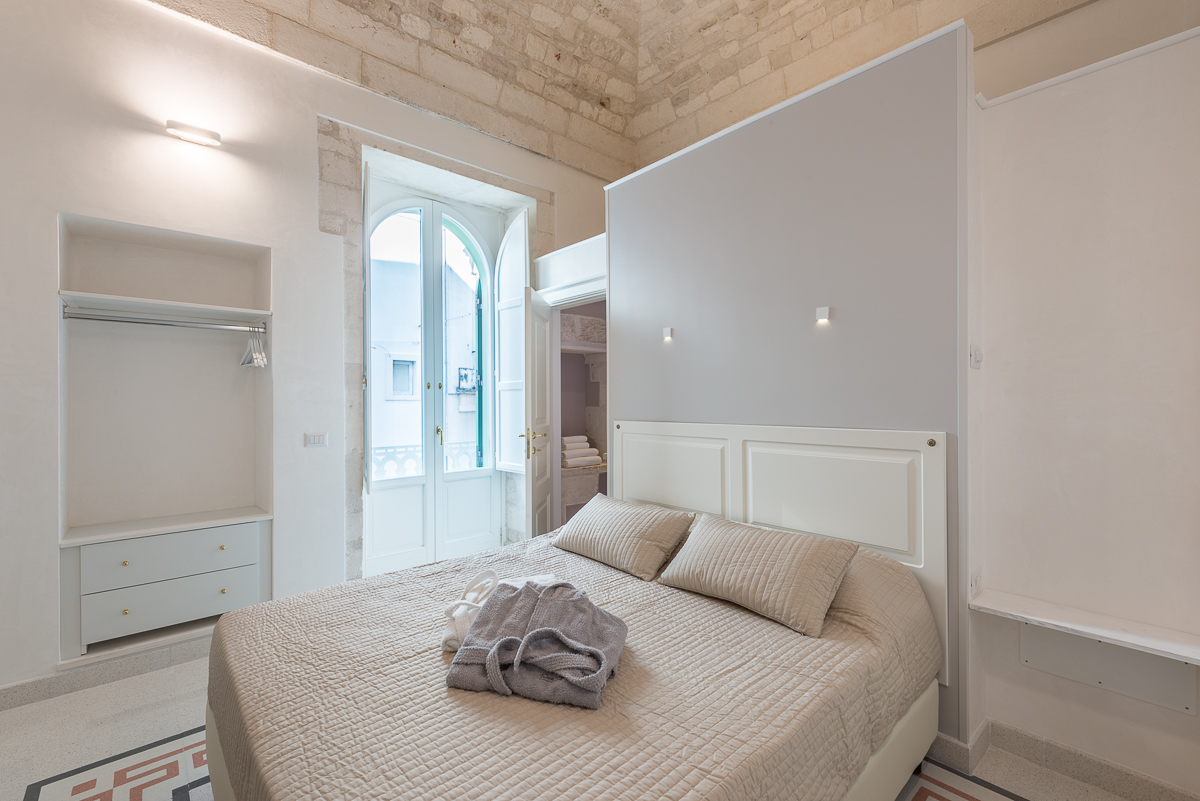 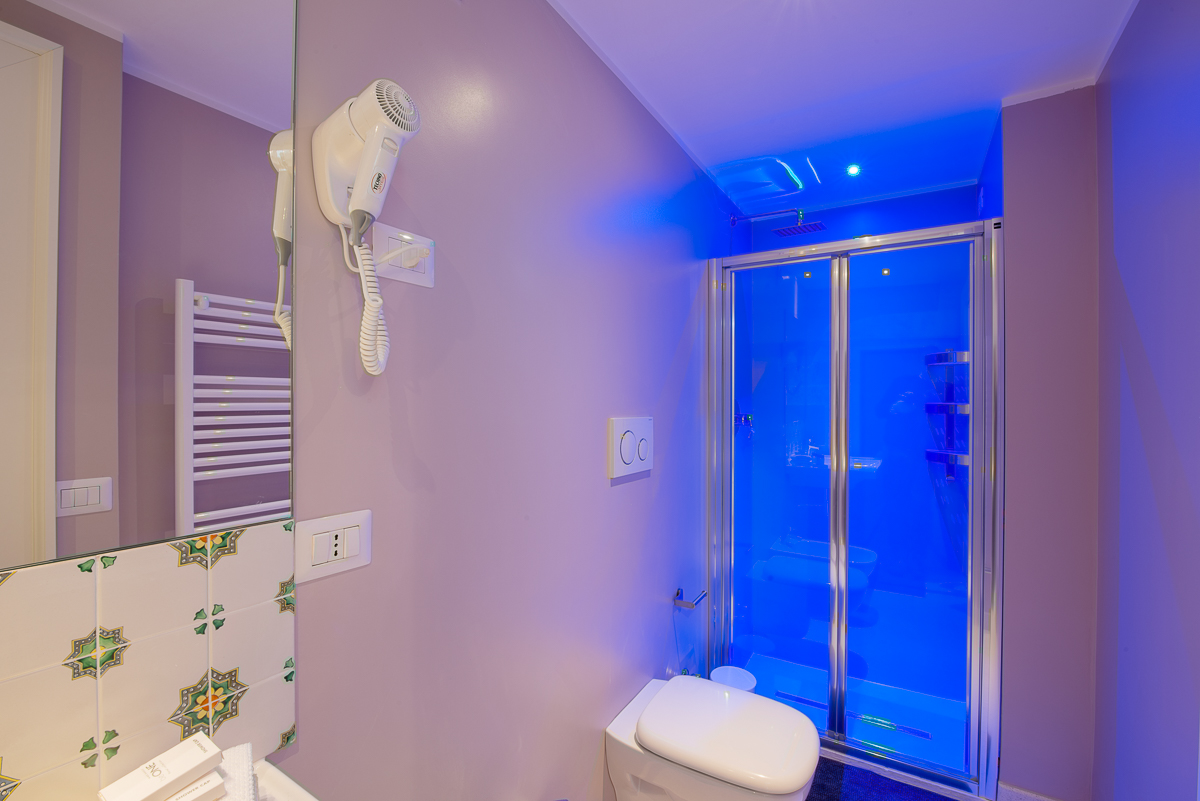 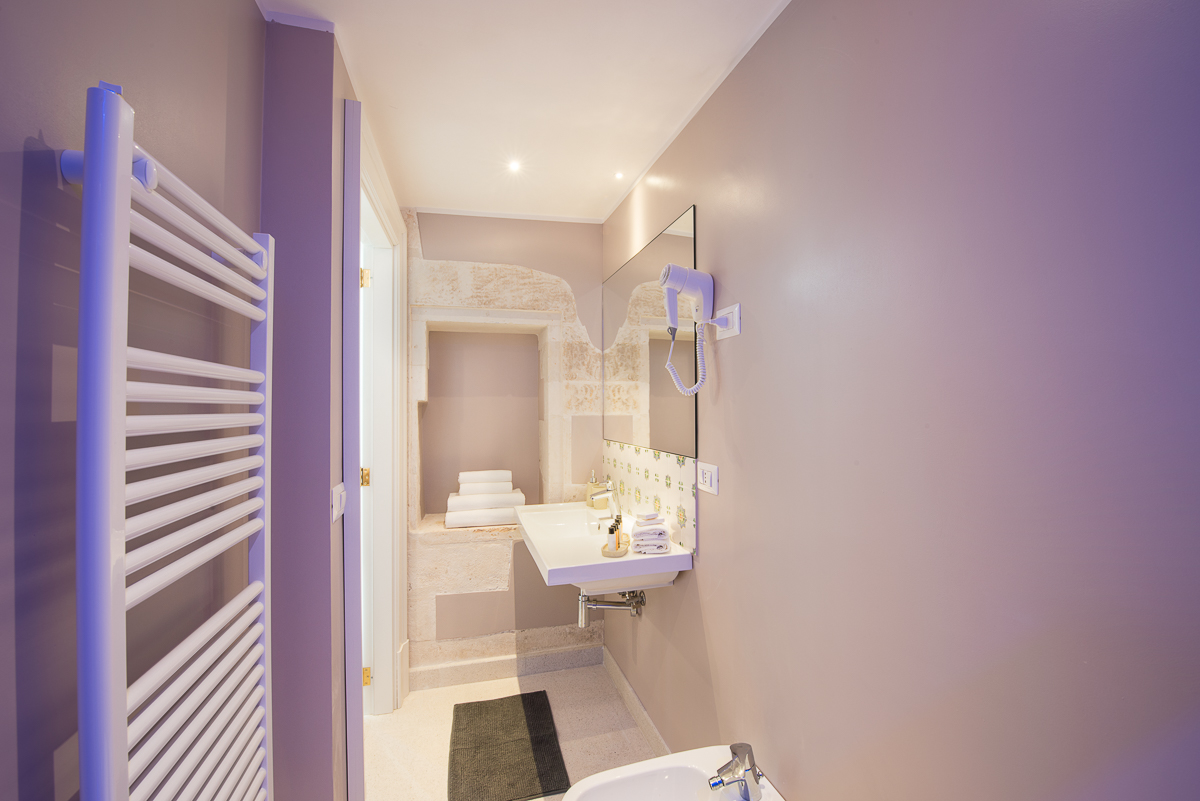 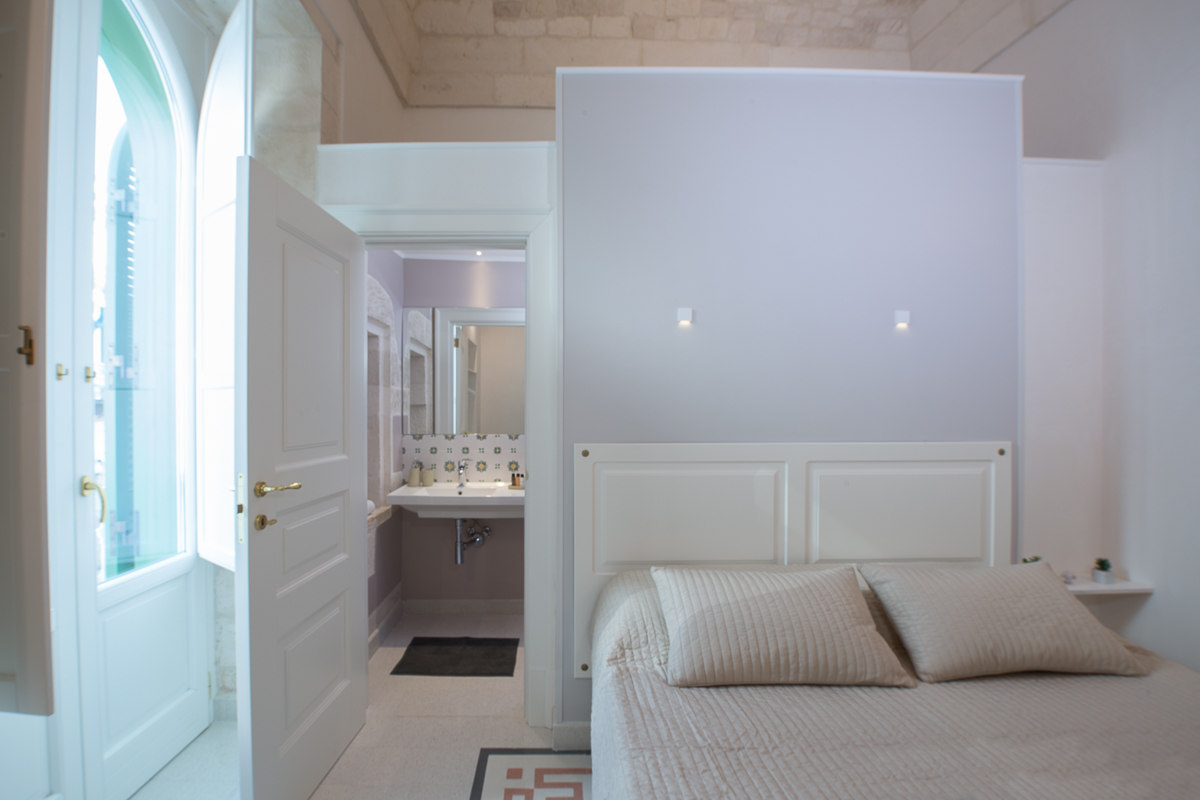 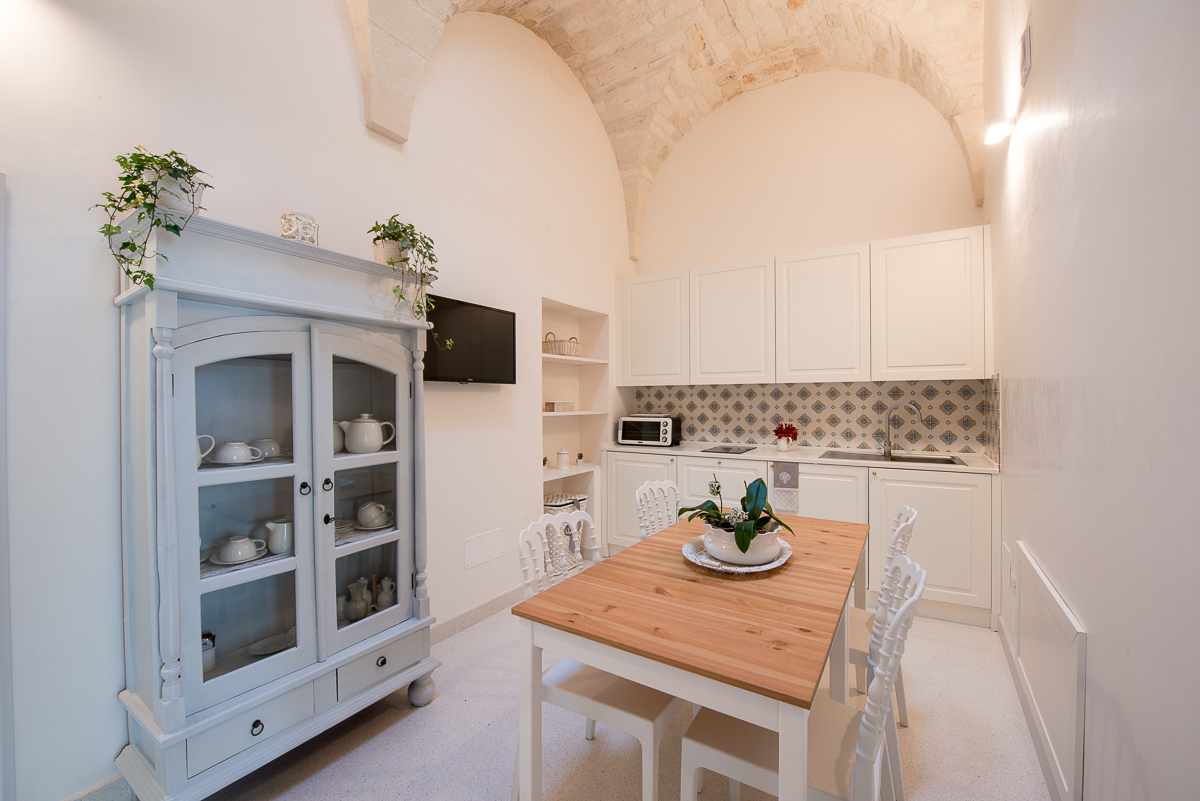 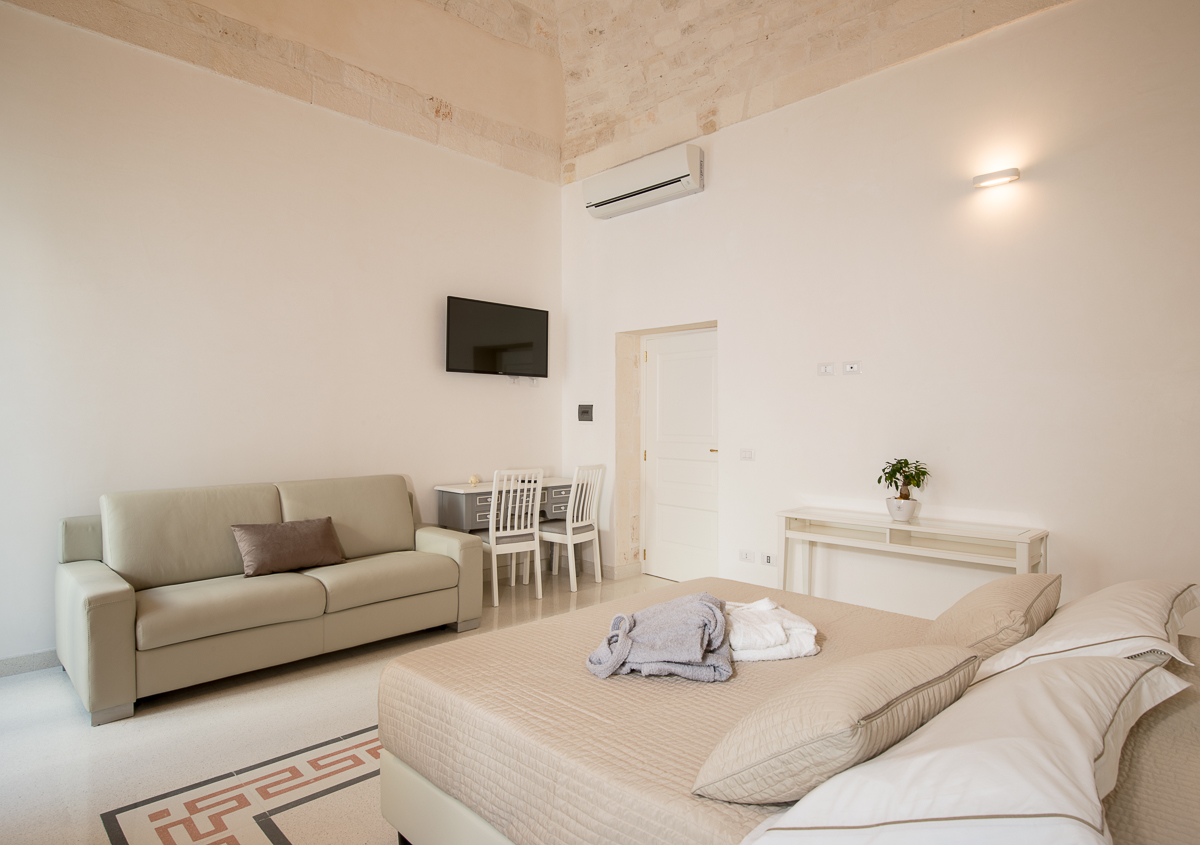 Silvia
How to find us
All information to find us and contact us
REQUEST INFO
CONTACTS
+39 0804301857
Vico II Garibaldi 8
74015 Martina Franca (TA)
info@relaisdelcorso.it
+39 3358498019
Where to find us
Relais del Corso is in the historic centre, in the pedestrian area of Martina Franca, a few steps from the Cathedral of San Martino and Piazza Plebiscito.
The area is limited to traffic but accessible by car at any hour following this route: from Piazza Mario Pagano (known for the presence of the church of San Francesco) go up the old town along Via Caraffa, then Via Manzoni and finally via Dante Alighieri which will lead you to Piazzetta Garibaldi where the residence is located.